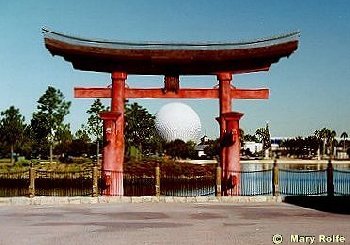 The Torii in Japan


Looking out from Japan at Spaceship Earth. I believe the tourguide said the gate signified peace.   The Japanese name for the gate is torii (not to be confused with tori, which means bird).

If we are permitted to quote Encyclopedia Britannica, the Torii is a symbolic gateway marking the entrance to the sacred precincts of Shinto shrines in Japan.   The torii, which has many variations, characteristically consists of two cylindrical vertical posts topped by a cross-wise rectangular beam extending beyond the posts on either side and a second crosswise beam a short distance below.   Some authorities relate it to the Indian gateway arch, the torana, which reached Japan with the spread of Buddhism.   Others connect the torii with traditional gates in Manchuria and elsewhere in China.   The torii, often painted bright red, demarcates the boundary between sacred space of the shrine and ordinary space.   Torii also identify other sacred spots, such as a mountain or rock.

Back to World Showcase

Back to A Pansoph's Walt Disney World

All images on this site are © by Mary Rolfe/Pansophist at http://www.pansophist.com/