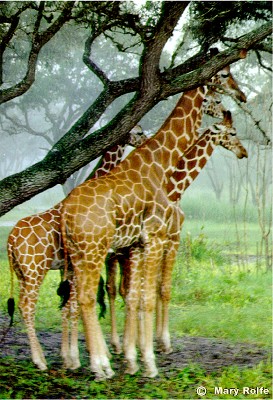 Gathered up close to each other and the tree, this group of Reticulated Giraffes seems particularly offended by the rain.   They can go for over a month without drinking, so one can suppose this is an inconvenience for them rather than a blessing.

They weren't angry enough to make any noise about it, However.   When they do vocalize, they only emit moans or low notes.

Back to Animal Kingdom


All images on this site are © by Mary Rolfe/Pansophist at http://www.pansophist.com/